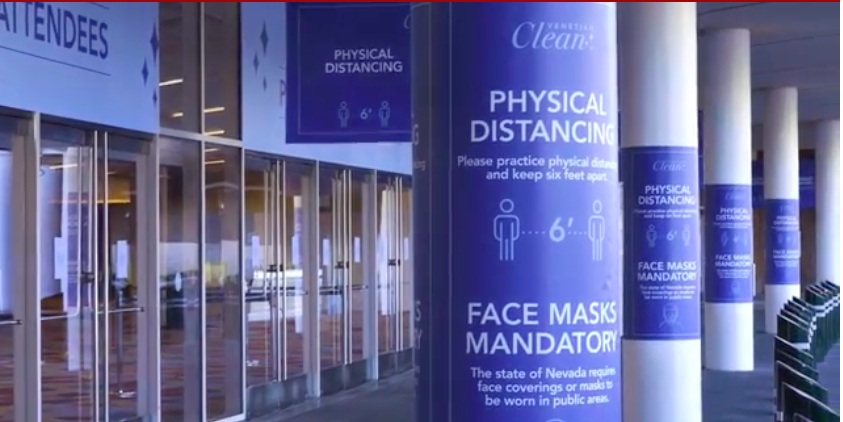 Las Vegas Sands Corp. says it is ready to host trade shows — it already did.

The company said it held a mock trade show with a 296,000-square-foot, physically distanced event setup at the Sands Expo exhibit hall for Gov. Steve Sisolak and other meeting industry professionals ahead of the state finalizing its new public gathering guidelines.

The mock event, which a company spokesman said “happened over several days last month,” took visitors through the entire trade show process, from arrival and registration to exhibit halls and vendor booths. Food courts and general sessions were also staged to demonstrate the updated protocols, which include physical distancing and sanitation procedures.

Sisolak announced Sept. 29 that capacity limits would be eased to allow larger meetings and gatherings. According to the new state guidelines, event organizers can apply to host as many as 1,000 attendees, as long as people are separated into groups of no more than 250 at a time in areas such as banquet halls.

“Meetings are at the heart of The Venetian Resort, and we recognize the importance of bringing meetings back in a safe and responsible way,” Chandra Allison, senior vice president of sales at The Venetian and SandsExpo, said in a statement. “We support our governor’s goal for Nevada that, as we re-open for meetings, we will be open for the long term, doing so with safety and consistency in mind.”

Sands, which typically hosts large conventions such as CES, has launched several initiatives to keep attendees at meetings and trade shows safe.

Read the full article and watch a behind-the-scenes video.